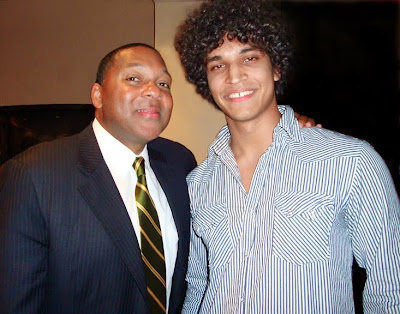 ...these guys have got it goin' on!!!
I may be a little biased about my boy, Luke, but Wynton Marsalis, one of the finest jazz musicians of all time, definitely walks away with the prize.
He kicked off  his superb performance with the Jazz at Lincoln Center Orchestra at the Lied Center for Performing Arts in Lincoln, Nebraska with his rendition of 'Old MacDonald Had a Farm'.  He cretainly knew his audience and won lots of hearts right off.
After the show,  Wynton cordially agreed to mix backstage with several admirers. He and Luke hit it off and shared a few moments of mutual affection which was cool and fun to be a part of. But, what was most impressive to see, was Wynton's personal touch on display. Being an award winning artist of international acclaim he could have easily basked in the lingering applause from his encore performance and considered his evening's work to be over. Instead, he chose to stick around and make some friends. Carrying with him the love and genuine respect shared between the boys in the band onstage, he entered the room and made a beeline to the wheelchaired fellow he spotted in the far corner.  Kneeling down, he talked warmly for some time and sincerely thanked the man for coming out to hear him play.  Then, as he mingled and showed personal interest in the rest of the fans, he came to a young kid who exuberantly proclaimed, 'Hey, I play the trumpet, too!'  Wynton said, 'Go, get your horn', and spent the next hour giving the kid the time and lesson of his life.
Now, that's cool!
It don't mean a thing if it ain't got that swing...
Tom
Posted by Tom Tidball at 4:30 PM No comments:

OPIUM FOR THE MASSES... 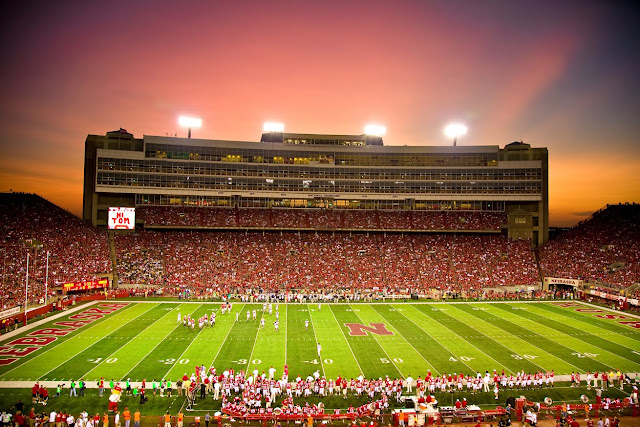 Outsiders may snicker about Nebraska with its predominately rural population and its 'a little rough around the edges' down home ways. But, there is more going on around here than often meets the eye. Sometimes, it shines through and hearts are revealed... events seeming to bring out the best in folks all around. In this case it just happens to be the statewide tradition of supporting the beloved University of Nebraska football team.
Last weekend, the whole state celebrated one of the most amazing records in the modern era of sports... the 300th consecutive sellout of Memorial Stadium for home games in Lincoln, Nebraska!
Yes, you may say it's just a game and there are certainly more pressing matters in the world today, but for insiders, you know what 'There's no place like Nebraska' means... For the rest of you, please click on these two links and you'll get an idea of what makes us proud to be Cornhuskers in Nebraska and what all the shouting is really about...

Tom
Posted by Tom Tidball at 12:02 PM No comments: